“Using Dali’s paranoiac method of creation I engage my drawing and painting materials in an attempt to exorcise personal anxiety and demons. The end result is usually a female nude expressing contrary social norms, such as being highly sexual but not sexualized, possessing abundant body hair but still being attractive, being objectified in a sexual situation but being physically unattractive.

Sometimes my females have male sexual organs, sometimes they are conjoined twins, and sometimes they are corpses or mutilated in some way. My attempt to personalize the female form and make it an expression of anti-patriarchy, pro-feminist ideals is a direct result of my life as a female in the oppressive western cis-gendered Christian white male society.

My works often have bright, anime-inspired symbolism and color palettes, drawing inspiration from my early life as an anime addict. Anime is highly misogynistic with very few strong, complete female characters within it that aren’t simply objectified bodies.

I draw, I paint, sometimes I collage, oftentimes using anti-art materials such as highlighters, gel pens, glitter, and sharpie markers. I often employ facial makeup to touch on the way females are expressly held up to an unrealistic physical standard and apply copious amounts of strange face paint in order to appear younger or more sexually enticing.

​My version of the male gaze is how I honestly experience it as a gross invention created to strip women of their inherent female power and reduce them to objects for use by heteronormative males. I plan nothing, preferring to simply let it pour out of me, using anxiety and depression as a fuel for my distaste of current societal standards and culture.” 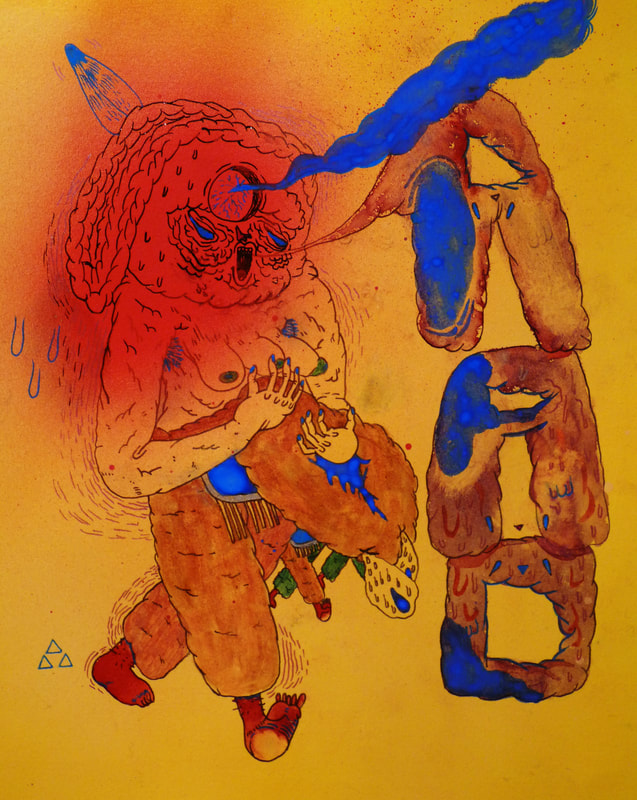